At Lloyds Banking Group being able to work in an agile way is a huge part of our culture. Job-sharing is just one of the ways that Lloyds achieves this. Here are some great examples of job sharing in action.

Watch how Jemma and Shelagh share the role of Business Support Manager at Lloyds Banking Group. 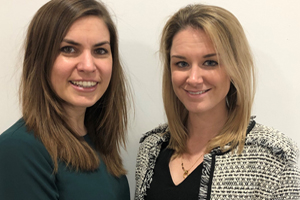 Lloyds Banking Group’s People and Productivity department is a clear example of the power of role models. When the Group first recruited a job share partnership to fill a People Director vacancy, it felt like a radical move. Now, just three years later, there are four job shares in the Group Executive Functions HR team alone.

For Kate Jeremiah and Louise Wykeham-Martin, who share the role of Head of People Partnering, the precedent was an important one. As Kate explains, “I remember thinking, when this first high-profile job share was appointed, is it really possible to job share at that level? And in a partnering role, that relies so much on relationships? But they were very credible, and showed that it could be done, which made me think that I could do it, too.”

“We prepped for our interview as a team – and it worked”

Kate and Louise both worked full-time for the Group alongside each other before each having their first child. They were both at a point in their career where they were ready to take a step up – but they also knew they didn’t want to work full-time.  So when their current role came up, even though it wasn’t advertised as a job share, they decided to apply together.

Says Louise, “The role was a promotion for both of us, but we felt we were ready. We also knew that we could be a stronger proposition as a pair than we would have been as individuals. And the same was true of the interview itself. We prepped as a team, which meant we’d already prepared our arguments for why we were a good match, and gave our confidence a boost.”

“We were upfront about the benefits our job share could bring”

The arguments that Louise and Kate came up with were certainly convincing. As Louise explains, “Kate and I have a combined corporate memory of 21 years, and we offer a wider range of skills and experience than one person could. My background is more on the HR side of the business, whereas Kate’s is more commercial. Kate is more data-led as an individual, whereas I start with the relationship. So together, we believe we are a really well-rounded package – and we made that clear up front. We can genuinely play to both of our strengths.”

Kate adds, “There are loads of other, more general benefits of job sharing, which we have always been clear about. For example, we’ve agreed that we won’t take our holidays at the same time, which means there’s continuous coverage of our role. Plus, job sharing delivers peak performance – we both come in fresh and ready to go on our first day back in the office, and everyone benefits.”

“We communicate constantly; that’s what works for us”

Louise and Kate believe that communication is the secret to their success. And they’re clear that every partnership needs to find a way of doing so that works for them. Says Louise, “We both want to know what’s going on, even when we’re not in. So we’ve got into the habit of leaving each other voicenotes at the end of each working day. It’s much easier than writing endless emails, and the information we’re sharing is much richer as a result.”

Kate continues, “It also means that we don’t need to have a formal handover on our crossover day, because we’re already up to speed. So we can spend the time working together instead.”

“Find your partner before you find your role”

So if there’s one last piece of advice they’d like to share, what would it be? Both Kate and Louise agree that finding the right partner is critical. Says Kate, “In a job share partnership, you need to be able to trust each other. You also need to have similar values, and to be working towards similar goals. We had really open conversations about all this before we applied for our job.”

Louise adds, “It’s almost a case of interviewing each other before committing to job sharing. We asked each other, how will we know if it isn’t working? Where do we want to be in five years’ time? What would we do if one of us wanted to separate? It’s important to nail down these details; we definitely recommend finding the right partner before applying for a role.”

But separating is probably the last thing on either of their minds. As Louise concludes, “We feel so fortunate to have come back from maternity leave, into a promotion, on a three-day week. It’s the best of both worlds!”

Fellow People & Productivity team members Emma Partridge and Lindsay Smith have jobshared for seven years, changing career and being promoted during that time. Here are the principles which ensure their partnership works:

This article has been written in association with Timewise Partner Lloyds Banking Group, which supports our Timewise Power 50 campaign.